Pyramids CR - constructions of extinct civilizations in our area

The Pyramids on the Territory of the Czech Republic 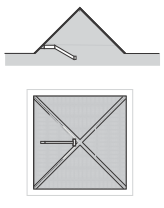 Show PDF document The monumental pyramidal structures with „artificial finishing touches“ appeared on the Earth as early as in Paleozoic times. Their creators were people of giant stature. These pyramids were basically a part of mountain ranges or single hills modified into pyramidal shapes with specially sanded surfaces and with specific internal structures of tunnels and chambers. They were carved using technologies that are unfamiliar to us. The oldest structures on the territory of the Czech Republic are almost always secondarily modified hills of pyramidal shape, paneled with two to three layers of large panels of artificial geopolymer-based stone, with underground multi-level circular labyrinth, and a system of tunnels and chambers.

So far, we have been researching these „structures“ mainly in the districts of Znojmo and Vranov in Podyjí region. Due to the rich occurence of pyramidal structures in this region, we have named the region „the Valley of the Pyramids”, just for our work purposes. The ruins are located on both banks of the Thaya (Dyje) River. It is a large site where many preserved architectural elements can be seen, including the remnants of surface paneling, vertex pyramidions, rib-reinforcements, internal masonry, corridors, chambers and underground vaults. In these deep underground vaults we have so far always detected two giant human skeletons, nine to twelve meters long. All of the above mentioned construction details were carved using special machines or radiation, i.e. technology unknown to us today, or they were cast of the artificial stone-based geopolymers, similar to the stone-blocks used during the construction of the great pyramids of Giza in Egypt.

Yet there were still younger pyramids on our territory, apparently built during the Tertiary period, constituting larger urban complexes of geometric networks, built partly of stone or cast blocks, especially in the areas where there were no mountains. The pyramids had to be artificially constructed. The „pyramids“ in the Czech Republic are located in both, Moravia and Bohemia regions, and they belong to the type of construction widespread throughout Europe! During the first phase of our research we were primarily focused on Podyjí region, because in that vicinity, the Earth's mantle broke up during the Tertiary period. The pyramidal structures standing on these tectonic faults broke up as well, therefore their internal structure was exposed. Thanks to this phenomenon, it is possible to observe their structural elements preserved in the stone fields on both sides of the Thaya river between Znojmo and Vranov nad Dyjí up until today. Some of the pyramidal hills are preserved almost completely at full mass, such as the unique double-pyramid of the Šobes mountain and many others in other localities of the Czech Republic.

Inside pyramids, there are special crypts with giant human skeletons that were carved in hard underlying rock, which made them well protected against destruction from the elements or turbulent geological changes. We have indicated their existence and location mentally from the information field and have documented their „physical fingerprints“ and size through detection using a specially modified „L-wire“ which reacts even to objects and buildings that ceased to exist a long time ago. During the second phase of our research we were gradually mapping other perished structures built on the territory of the Czech Republic by our technologically advanced ancestors. We wanted to prove that our country, and the entire Europe do hide an underground evidence of ancient human history that is quite different from what is being currently presented to us.